Rishi Kapoor's pain spills the rape case, says, "Humans are alive but where is humanity?"

Mumbai / Hyderabad  There is outrage across the country after the rape of 26-year-old Veterinary Doctor in Rangareddy district of Telangana. After Bollywood stars Akshay Kumar, Salman Khan, Farhan Akhtar and Varun Dhawan, Rishi Kapoor has now supported the hanging of the accused. Rishi Kapoor tweeted, “I support punishing the accused to death.” We have to stop such incidents. “

I support Capital punishment for rapists! This has to stop! 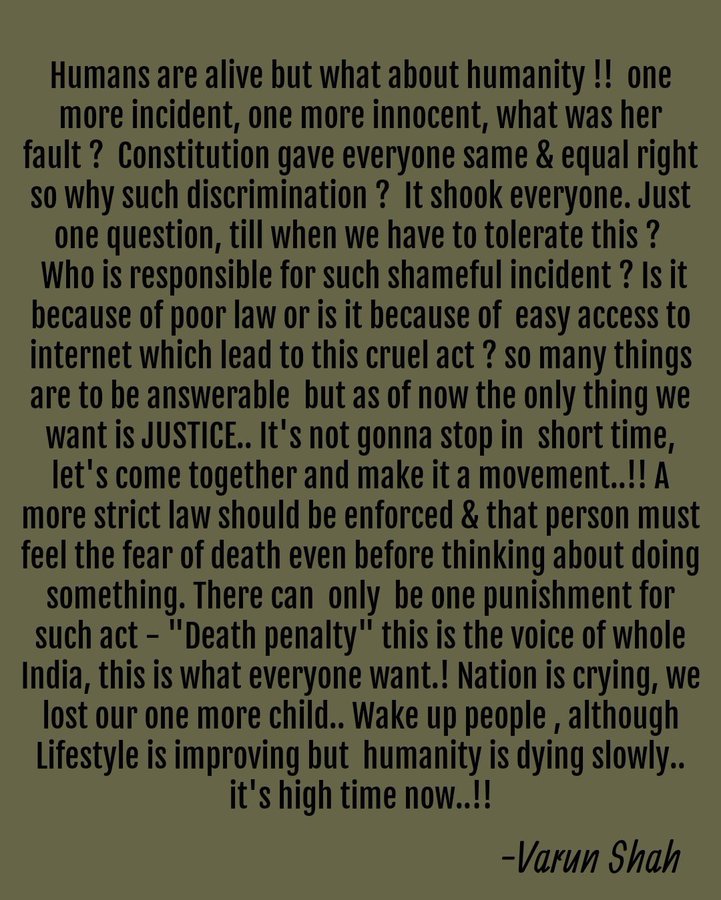 1,439 people are talking about this

Rishi Kapoor further wrote, tagging Varun Shah’s talk, “Humans are alive, but what about humanity?” Another incident, another innocent woman, what was her fault? Our constitution has given equal rights to all, then why this discrimination? This incident has shaken everyone. Just one question, how long will we tolerate all this? After all, who is responsible for this incident? Is it because of our poor law or is there such a cruelty due to easy access of people to the internet? Well, whatever, but we need justice now. We all should come forward and make it a movement. To prevent such incidents, we have to make strict laws, so that before thinking of this, there is a fear of death in the minds of people. If there can be any punishment for this disgusting work, then it is just punishment-a-death. Right now this is the voice of the whole country. This country is crying that we have lost our red once again. Wake up people,

Need to eliminate devils hidden in the guise of humans: Salman
Earlier, Salman accused the accused of doing such a disgusting person as a devil hidden in human guise. Salman wrote- “We should put an end to these devils spread in the society.” These are the devils hidden in the veneer of man. After the Nirbhaya case, we should immediately eradicate such devils living around us. It must be stopped before another innocent woman or her family goes through this agony. Save the daughter should not be limited to just one campaign, but now the time has come to tell these devils that we are all standing together. May the soul of the victim rest in peace. “

#JusticeForPriyankaReddy These r the worst kind of shaitans disguised in the human form! The pain, torture n death of innocent women like nirbhaya n Priyanka Reddy should now get us together n put an end to such shaitans who live among us, before any other innocent woman…(1/2)

14.3K people are talking about this

We have failed as a society – Akshay Kumar
Akshay wrote in his tweet – “whether she is a female doctor from Hyderabad, Roja of Tamil Nadu, or a law student from Ranchi. As a society we have failed. It has been 7 years since the Nirbhaya gang-rape, but our moral values ​​have varied. We need tougher laws. All this should stop soon. “

About the author:   Vijin Kumar Varma
Note : All views expressed, and statements made, therein are those of the author solely and NewsReach/Vyomeen Media Pvt. Ltd. does not endorse and will not be responsible and/or liable for the same as well as for any contents of this article in any manner whatsoever, including without limitation for the veracity as well as verification of any of the above.
Share: