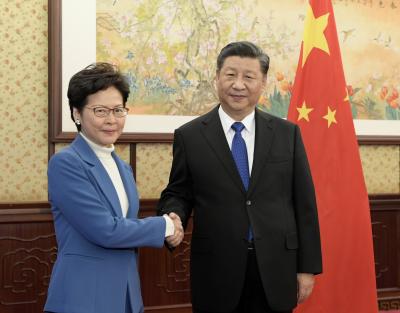 Hong Kong, May 29 (IANS) Hong Kong Chief Executive Carrie Lam on Friday reiterated her support for the new security law approved by Beijing, while the government has expressed strong opposition to US Secretary of State Mike Pompeo saying that the city could no longer be considered autonomous from mainland China.

The government published a letter by Lam in which she defended her support for the contentious security law which seeks to do away with any “foreign interference” in the region, approved by the Beijing a day earlier, and which lawyers as well as civil society experts believe could curtail the freedoms enjoyed by the semi-autonomous city, reports Efe news.

“There is both the need and the urgency for legislation, the constitutionality, lawfulness and reasonableness of which are beyond doubt,” Lam said, adding its aim is to “enable Hong Kong society to find a way out of the impasse”.

She added that “the opposition forces and organizations advocating ‘Hong Kong independence’ and ‘self-determination’” disregarded the interests of the city, while “external forces” have “seriously jeopardize(d) our nation’s sovereignty, security and development interests”.

Lam believes that the law will “target an extremely small minority of illegal and criminal acts and activities” and will not affect the rights and liberties of the people of the territory.

Meanwhile, the Hong Kong government on Thursday rebutted Pompeo’s “unfounded allegations” that Hong Kong could no longer be considered autonomous from China, which could threaten the preferential trade status given by Washington to the former British colony.

“These remarks misrepresented the constitutional relationship between the HKSAR and the Central Authorities, smeared the implementation of ‘One Country, Two Systems’ in Hong Kong and interfered in the internal affairs of Hong Kong,” a government spokesperson said in a statement.

The spokesperson reiterated that “Hong Kong is an inalienable part of the People’s Republic of China”.

“It is a local administrative region which shall enjoy a high degree of autonomy and come directly under the Central People’s Government.”

Addressing possible US sanctions on Hong Kong, the spokesperson said that its special status of “separate customs territory” was enshrined in the constitution.

“We shall continue to pursue the policy of free trade. As a separate member of the World Trade Organization, we expect to be fairly treated by our trading partners,” he added.

The spokesperson added that “the threat of sanctions to achieve the purpose of interfering with the policy of another place is a violation of international law and international practice. Practically, in Hong Kong-US relationship, any sanctions are a double-edged sword that will not only harm the interests of Hong Kong but also significantly those of the US”.

The measure could prove to be a blow for the semi-autonomous city, which is an important trade and financial hub on a global level, and it could mean punishment for China, which uses the territory to do business with other countries.

Beijing has warned that, if the US goes ahead with the said measures, it would retaliate.

US Ambassador to Germany Richard Grenell resigns from post