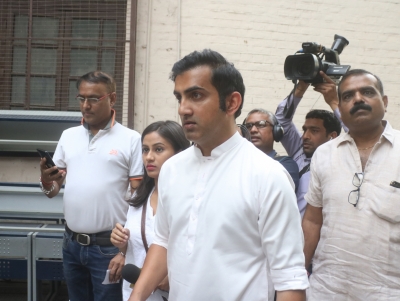 New Delhi, May 27 (IANS) Cricketer-turned-politician and the BJP’s East Delhi MP Gautam Gambhir on Monday condemned the attack on a Muslim man in Haryana’s Gurugram and demanded exemplary action against the culprits.

“In Gurugram Muslim man told to remove skull cap, chant Jai Shri Ram. It is deplorable. Exemplary action needed by Gurugram authorities. We are a secular nation where where Javed Akhtar writes ‘o palan hare, nirgun aur nyare’ and Rakeysh On Mehra gave us the song ‘arziyaan’ in Delhi 6,” Gambhir said in a tweet.

His remarks came after a video went viral in which a Muslim man was purportedly seen in Gurugram being asked to remove his skull cap and to chant ‘Jai Shri Ram:.

The Gurugram Police has registered a case. The police has also taken the CCTV footage to identify the culprits.

No one has been arrested yet.

Shivakumar to take over reins of K’taka Congress on Thursday

Use science to better lives of citizens: PM to scientists

Article 370 revoked in J&K rattles some nations: Should India be...