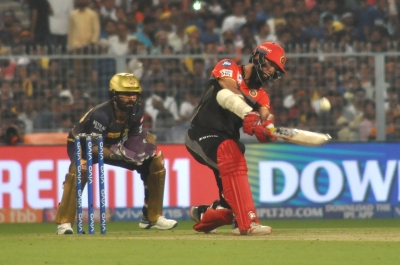 Kolkata, April 20 (IANS) After conceding a 10-run defeat against Royal Challengers Bangalore (RCB) in the ongoing Indian Premier League (IPL), Kolkata Knight Riders (KKR) skipper Dinesh Karthik admitted it was Moeen Ali who took the game away from the hosts at the Eden Gardens.

RCB scored 70 runs for the loss of just one wicket between overs 14 and 17. After Ali’s dismissal, Kohli and Marcus Stoinis (17* off 8) continued the carnage and collected 45 runs in the last three overs to help RCB post a mammoth 213/4 in their stipulated 20 overs.

“I think the way Moeen batted, he took the game away from us. He played a few good shots…,” said Karthik after the match.

“I thought they were 20-25 runs too many and that’s what happens when a player like Virat plays. It was a brilliant knock from him. The ball was seaming a little, and the new ball had a bit in it and it wasn’t easy for stroke-making. If I had to look back, it was 20 runs too many,” he added.

The KKR skipper also admitted that it was a tough wicket for the spinners with short boundaries and a lightning-quick outfield.

KKR have now lost four games in a row and are languishing at the sixth spot in the points table with five more to go before the play-offs.

“If we play a couple of good games things will start to roll and I believe in my boys. If we do the right things we will be back on track,” he said.

KKR will next lock horns with Sunrisers Hyderabad (SRH) on Sunday.

No Dukes, only Kookaburra ball to be used in Sheffield Shield

Can’t wait to get back into that dressing room: Pujara

Owaisi calls for ensuring social distancing in places of worship

Iyer plays it cool with fans on social media