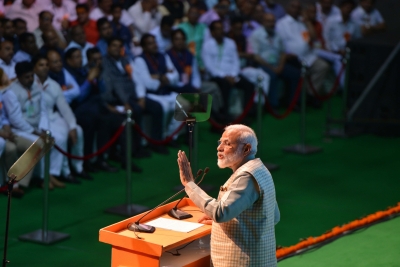 New Delhi, April 19 (IANS) Prime Minister Narendra Modi on Friday said the Congress had created a negative perception about traders by blaming them for the price rise.

He said traders are the most affected community when prices rise much against the impression that they benefit from inflation.

“Instead, the truth is that the average trader of India has to take twice the heat of price rise than others. On the one hand, he faces problems in maintaining his own household budget and on the other, his business takes a hit due to high prices and a low demand,” he added.

The Prime Minister said his target has been to ease business operations of traders.

Defending the Goods and Services Tax (GST), he said the new tax regime brought in transparency and the revenue of states increased by one-and-a-half times. The number of registered traders rose twice after GST was introduced, he said.

The government has been addressing traders’ concerns with GST Council meeting every two months and reviewing the rates. As a result, most of the essential products are now in the zero tax slab, and around 98 per cent goods and services are below the 18 per cent slab, Modi said.

“Earlier you had to wait a year for the next budget for tax relief, but now things have changed. Your suggestions are considered regularly,” the PM said.

Reiterating the promises made in the manifesto, Modi said the BJP, if elected to power, would come up with a national policy for retail trade and provide an accidental insurance of Rs 10 lakh to all the GST-registered traders in the country.

He also promised a merchant credit card for the GST-registered traders, in line with the Kisan credit card. The BJP would also create a national board of retail traders, which would act as a medium between the traders and the government, he said.

He also promised a pension policy for retail traders as mentioned in the party manifesto.

The Prime Minister said the country jumped 75 places to the 77th rank globally in terms of ease of doing business in the last five years, and that he aims to reach the 50th position in the next half decade.

Shivakumar to take over reins of K’taka Congress on Thursday

Savarkar’s bust to be back in DU? (IANS Exclusive)