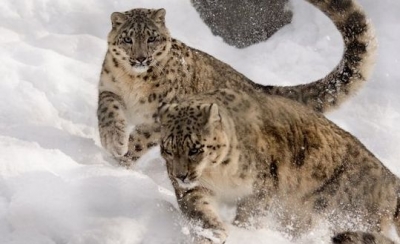 Shimla, May 22 (IANS) Wildlife officials in Himachal Pradesh on Friday claimed that they have “successfully” reintroduced the six-month snow leopard in the wild in the Spiti Valley, some 350 km from Shimla, after 16 days of captivity.

However, wildlife lovers and experts were apprehensive about the survival of the cub in nature, after keeping him in human captivity so long.

The snow leopard cub that got trapped in a corral of Giu village of Kaza subdivision was captured on May 2, a media statement by Chief Wildlife Warden Savita said.

It was found to be injured and dehydrated and was brought to the nearest wildlife quarantine centre of the Himalayan Nature Park in Kufri for necessary treatment.

During its quarantine, extreme care was taken lest the animal develops any kind of human imprinting. After diligent care, it was found to be healthy for its release back into the wild, she said.

Doubting the success on its reintroduction into the wild, Rajeshwar Negi, national convener of Nature Watch India, said the cub’s chances survival in the wild or reuniting with its mother is remote.

“Without its mother, the cub wouldn’t be able to learn the survival skills like chasing the prey. In this case, the cub develops the habit of commercially prepared food like chicken during captivity,” Negi told IANS.

“It survival through hunting is almost bleak now. Also its mother won’t accept the cub after so long a gap,” Shimla-based Negi, who is monitoring developments relating to the cub since its capture, said.

He questioned the decision of the wildlife wing to capture the cub.

“The unwarranted capture and now unexplained release of a six-month-old cub is an extremely botched-up case of misadventurism and bungling of wildlife and that of a threatened species like the snow leopard,” he said.

“It violates all protocols and procedures regarding capture, transport and rehabilitation of felines, particularly leopards and tigers. Now with its release, they endanger the survival of this hapless cub,” Negi said, demanding that the location of this cub be strictly and authentically reported.

Rather than re-introducing it in its alpine habitat soon after trapping it by “mistake”, wildlife officials transported this vulnerable species for veterinary checkup to the nature park in Kufri, near here, some 350 km from the spot.

The decision has angered wildlife activists.

The wildlife wing had earlier admitted to IANS that there is no wildlife rehabilitation centre in high mountain passes of the state where the Central government-funded Snow Leopard Conservation Project is underway.

On its reintroduction, the wildlife wing statement said a team transported the animal to the location in the vicinity of its capture on May 16-17.

Keeping in mind the vulnerability of the species, due care was taken to complete the journey only during the cool hours of the day. The animal was medically observed at intervals of two hours throughout the journey and was adequately fed, watered and rested intermittently.

Another team headed by the DFO (Spiti) and representatives of the Nature Conservation Foundation had located a female snow leopard, probably the cub’s mother, near Giu village.

The team kept close tabs on the movement of the animal. A strong liaisioning between the two teams was developed and a strategy was formulated to release this cub in its habitat itself near to the place from where it was captured, said the statement.

The cub was kept at this location for a short period and the team set up a camp at a short distance from the place. Entire area was covered through camera-trap surveillance and the animal was finally released in the evening of May 18 in accordance with guidelines.

Till the morning of May 21, no report of cub straying into human habitation has been reported and it is presumed that the animal receded deep into its wild habitat which is good for everyone, added the statement.

Wildlife lovers, however, said that it is not clear how the wildlife wing managed to reunite the abandoned cub with its mother or made up its opinion that it would survive in the harsh habitat with lack of survival skills like hunting.

(Vishal Gulati can be contacted at vishal.g@ians.in)

B'luru, Mysuru zoos to be shut on Sundays in Unlock 2.0