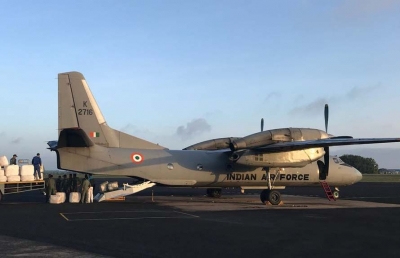 New Delhi, June 11 (IANS) The Indian Air Force (IAF) said on Tuesday that it has spotted the wreckage of the AN-32 aircraft which went missing in Arunachal Pradesh on June 3 with 13 people onboard.

“The wreckage of the missing An-32 transporter aircraft has been spotted at Lipo, northeast of Tato, at an approximate elevation of 12,000 feet by the IAF Mi17 helicopter undertaking search in the expanded search zone,” IAF spokesperson Wing Commander Ratnakar Singh told IANS.

“Our next effort is to get to the wreckage site to establish the status of the occupants and search for the black box and CVR of the ill-fated aircraft with tail number K-2752,” Singh said.

On June 3, the Russian-origin An-32 trasnporter took off from Assam’s Jorhat at 12.27 p.m. for the Mechuka Advanced Landing Ground in Arunachal Pradesh’s Shi-Yomi district bordering China. The aircraft lost contact with the ground staff at 1.30 p.m.

On June 8, the IAF announced a reward of Rs 5 lakh for any information leading to the location of the missing aircraft.

Besides, teams of the Indian Army, the Indo-Tibetan Border Police (ITBP), local police and other agencies were involved in the search operations on the ground level from the day the aircraft went missing.

Help is help, shouldn’t question amount one has donated for coronavirus...

Kiara has no qualms in ditching make-up for camera

Will cooperate with agencies till my name is cleared: Vadra (Lead)